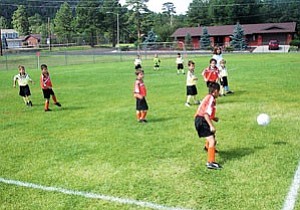 Williams AYSO soccer teams will be wrapping up their season with double headers in Flagstaff Saturday.

As Williams AYSO soccer teams come close to the end of their season, the final round of home games was played this past weekend.

The U6 girls Wild Horses were up against the Flagstaff Sour Apples and won with a score of 8-1. Kaitlyn Russell scored one goal, Sierra Karlson scored three, with Taya Mortensen and Karli Grantham each scoring two goals for the Wild Horses. The U6 boys Ninja Turtles played the Rockets from Flagstaff, but lost 2-7. Noah Walters and Michael McNelly each netted a goal for Williams.

Meanwhile, the U8 girls team, the Orange Tigers, snapped the Flagstaff Stingers with a 4-3 win. Tori Walters scored three for the Tigers while Taylor Kramer sank one into the net. The U8 boys Orange Venoms battled the Flagstaff Blue Sharks and won their match with a score of 5-4. Christian Ramierz planted four goals for the Venoms while Gabriel Chavez drove one into the net as well.

With a score of 2-6, the U12 boys Terminators had an unfortunate loss against the Flagstaff Galaxy team. Sam Richmann and Adrian Solano each scored a goal for the Terminators. The spotlight of the day, however, shone on the U12 girls Mighty Dynamites. They played a dou-

ble header and did well in both matches. In the first game against the Flagstaff Blue Ice, the Mighty Dynamites melted them down with a 3-2 victory. Krystol Yazzie scored two goals while Karrina Rotter knocked one into the net. The second match was a reschedule for a rain-cancelled game from the weekend prior. The Mighty Dynamites held their ground against the Flagstaff Purple Power and tied it up at two each with Yazzie scoring both goals for the Dynamites. Several of the U12 girls have been selected to try out for the Winter Soccer Club team that travels during the winter months with games scheduled in the Phoenix area. These girls headed to Flagstaff on Aug. 22 for tryouts and the results will be printed at a later date. The Williams AYSO League will play their final matches of the season Saturday in Flagstaff with the Williams teams playing double headers.