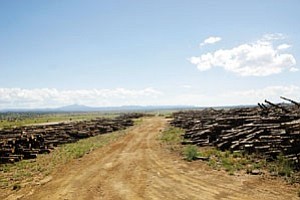 A new business being formed just a few miles west of Ash Fork is taking timber away from the Kaibab National Forest ‹ and that's a good thing.

Southwest Forest Products, a large pallet manufacturer out of Phoenix, has purchased approximately 80 acres of land two miles northwest of Ash Fork and plans to build a new small-diameter-wood sawmill.

"It's going to be the same as our facility in Phoenix," said Vice President of Operations Scott Van Der Toorn. "We will use small diameter timber from the region to manufacture pallets."

He explained that the company decided to begin the new northland facility not only because the land was affordable, but also to branch out, get closer to their resources and closer to markets outside Arizona.

The company is currently stockpiling vast amounts of timber at the site and Van Der Toorn says the manufacturer has hopes of beginning operations in February 2006.

Though relatively small to begin with ‹ offering 12-20 new jobs for the area ‹ Southwest Forest Products may expand the facility in the future, depending on the available yield of surrounding forests.

Kaibab National Forest officials are happy because the company has already made two large small-diameter timber purchases from KNF and plans to buy more. This, of course is the same material the Forest Service primarily targets for fuels reduction thinning projects.

"Small diameter timber industry is really going to be critical to us in helping to meet our long term fuels reduction objectives," KNF Fire Information Officer Jackie Denk said. "Basically, the more we can sell, the more we can treat."

Van Der Toorn says the $5-$7 million Ash Fork facility will probably go through 250,000 board-feet per week. The 14-acre Phoenix mill currently goes through 800,000 per week and Southwest Forest Products will use timber from a 50-mile radius for its northland operation.

Those in the Ash Fork area especially are pleased with the prospect of a notable boost to their economy.

"We stand behind anything that will help our community to be more economically productive as long as it doesn't harm our air quality or water," said Ash Fork Development Association President Fayrene Hume.

Van Der Toorn says the company will start actively seeking to fill its available northland positions towards the end of the year, but offers that it never hurts for any interested party to send in an early application.