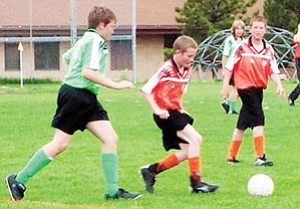 The Williams U12 team, the Terminators, traveled to the Grand Canyon last weekend to take on the Green Dragons, wiining the match 7-5.

On July 30 the U6 girls Wild Horses played the Flagstaff Butterflies and lost 5-3. Taya Mortensen, Sierra Karlson and Kaitlyn Russell each scored a goal for the Wild Horses.

The U6 boys Ninja Turtles played the Flagstaff Blue Eagles but dropped the game 9-3 with Noah Walters, Maxwell Schramm and Daniel Yazzie each scoring one Williams goal. The U8 boys Orange Venoms tied with their opponents ‹ the Flagstaff Green Lizards ‹ with a score of 2-2. Tyler Dodds scored both goals for the Venoms. The U8 girls Orange Tigers won against the Flagstaff Blue Stars 5-1. Teddy Yazzie and Molly Richmann each got one past the goalie while Tori Walters scored an impressive three.

The U12 girls Dynamites used the force against the Flagstaff Jedi Masters and toppled them with a score of 4-2. Krystol Yazzie scored all four goals for the Dynamites with exciting, passing and dribbling assistance from her teammates. The U12 boys Terminators traveled to the Grand Canyon to battle the Green Dragons. They won an impressive match against their co-ed opponents with a score of 7-5. Ivan Ruiz scored two goals, Brandon Bailes knocked in three, Wesley Bailes scored one, and Adian Grantham scored a goal for the Terminators as well.

The Williams AYSO league will be at home again on Aug. 6 as well as picture day at the Williams High School soccer fields, so come on out and support the kids.