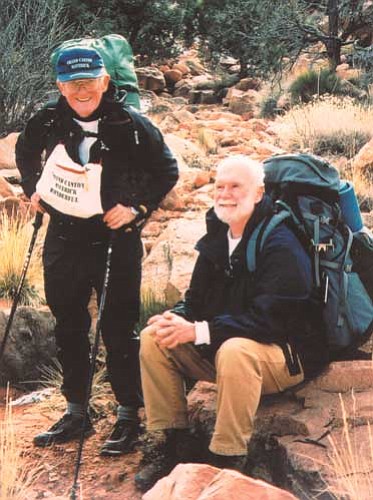 "I'm 30 pounds lighter than I was when I was 19 and went into the service," he says proudly.

Arguably, he's in better shape than many 19-year-olds he enounters today and he aims to prove it by hiking rim-to-rim 30 times this year. So far, he's made the trip 17 times, seven times in his birth month. His fastest crossing time is 11 hours.

Though Maverick has been hiking the Canyon for three decades, since he moved to Grand Canyon Village six years ago he's climbed to the top of his form not only through extensive time in the backcountry - he goes through about about 25 permits a year - but also through almost-daily hikes to Three Mile House and back and physical conditioning at home.

"It's kept me young," Maverick says. "The most important thing we can do to retard aging is to exercise. I'm more fit than I ever was."

Maverick first ventured into the Canyon on a hike with his second wife after reading Colin Fletcher's "The Man Who Walked Through Time." That first trip got him hooked.

"The Canyon just got in me," he says.

After that, he traveled from his Denver, Colo., home each Christmas for several years, for five-day hikes with the Sierra Club. Then, his visits became infrequent until about six years ago, when he encountered South Rim residents during his hikes.

"I thought, 'I could be one of those,'" he said. He applied for a job at Xanterra Parks & Resorts and was soon hired as a night server at Maswik, where he met his future wife, Shirley. "She chased me until I caught her," he says.

She was his hiking companion as well until bunion problems limited the distance she could walk.

"She can only hike on the rim, but she lets me go," he says. In the beginning, he had a hard time finding hiking partners but that's no longer a problem as people turn to him for his knowledge of the Canyon, gleaned from the thousands of miles he's traveled. Those who do hike with him are not only buoyed by his upbeat attitude; they also get a memento of their trip - a T-shirt that says "I went all the way with Maverick."

While he loves being a mentor to hikers and enjoys traveling any part of the Canyon, he said he has five points that "stand head and shoulders above the rest."

• The northern part of the North Kaibab Trail to Roaring Springs. "It takes several repetitions of the same area before it sinks in," he says.

• The part of the Tonto Trail that connects the Bright Angel and the South Kaibab.

• The trail from the North Rim Lodge to the rim, with its magnificent view overlooking Transept Canyon.

• And the South Bass Trail to the Bright Angel.

"That's my favorite trail," he says. "The more I do it, the more I like it. From the South Bass until the time I get to Hermit, I usually don't see anyone."

While he enjoys the scenery during the day, he especially likes to hike at night, when even the darkness doesn't obscure the magic of the Canyon.

"One night, I watched lights dancing around below in the campsites as people got ready to leave, then I watched the six or seven lights going up the trail," he says.

Before he moved to Grand Canyon, he hiked often in the Escalante, It was there he learned a basic lesson in fuel efficiency.

"The first time, I went on a seven-day trip and I was carrying two medium-sized bottles of fuel. Before the seven days was up the fuel was gone. The next time, I took an 11 ounce bottle and after 14 days it was still full," he recalls.

The difference was a simple one - the first time, he was cooking pancakes which take about an hour to make. The second time, he stuck to boiling water to rehydrate food.

While some hikers may prefer pancakes to freeze-dried food, Maverick takes pride in his his efforts to lighten his pack.

"I can go overnight with as little as nine pounds," he says.

The science of lightening ones load can be measured in three areas, he explains. The first is in weight. Second is volume.

"If your volume shrinks you can take a smaller pack which means less weight," he says. The third he says, "is something nobody talks about and that's body weight."

Paring down body weight and subsequently the need to carry more food, is what Maverick calls "the next step" in honing his efficiency on the trail and is the title and subject of a book he plans to write.

Today, he says his weight with a full pack is equal to what his body weight used to be.

Despite all his time spent in the Canyon, where in addition to hiking, he's logged many hours as a volunteer doing PSAR duty, providing interpretive services on South Kaibab Trail and removing graffiti at Indian Garden, there was only one time he came close to not finishing a hike. That was during a double-crossing in December.

"When I got to Phantom Ranch, I couldn't go any further because of my toe. The ranger their cut a hole in my shoe but that didn't work. Then he gave me a new pair of sandals to hike out with," Maverick says. He hiked out without difficulty.

He has loosely gathered group called the Grand Canyon Geezers, which consists of Allen Blair and himself, but geezers of any age are welcome.

As far as the future, he's already making plans for a hike to celebrate his 80th birthday, retracing Fletcher's trip from Havasu to the Little Colorado and Nakoweap. After that, he says, "My hope is to still hike the canyon when I'm 100 years old."